In the case of equal viability of RRs and R(L)s, proportion of hybrids in HPS rises continually, as all offspring from crossings between RRs and R(L)s are hybrids. In this case HPS is dying due to unviability of offspring from reciprocal crossings between R(L)s. Thus, transformations of described HPS can lead to one of the following outcomes: (1) population of P. ridibundus, (2) R-E-HPS or (3) death of the HPS.

It was suggested, that hybrids' advantage in reproduction is offset by their weaker viability, and this is the explanation of distribution of described R-E-HPSs. Initially, we assumed, that RRs and R(L)s have the same age of sexual maturity and fertility and have an equal lifespan. Using this conditions, simulation has showed that coexistence of RRs and R(L)s is not stable. With all correlations between viability of RRs and R(L)s and with all initial compositions of the HPS simulation results in outcome (1) or (3).

Different result was observed, when individuals from the modelled HPS realized different ontogenetic strategies. Intrapopulation ontogenetic strategy of precocity is characterized by increasing of growth rate and number of offspring per breeding season, and also by reducing of age of sexual maturity and by probable lifespan decreasing. The stuntedity strategy has the opposite characteristics (Шабанов и др., 2014; http://batrachos.com/Ontogenetic_strategies).

In case when individuals RR and R(L) used different ontogenetic strategies, the stable zone of their viability values occurred, where their stable coexistence became possible. At certain ratios between viability of RRs and R(L)s, the outcome (2) was more probable result of simulation.

We assume that registered by us phenomenon is the result of effect of more general mechanism, allowing stable coexistence of competing species. 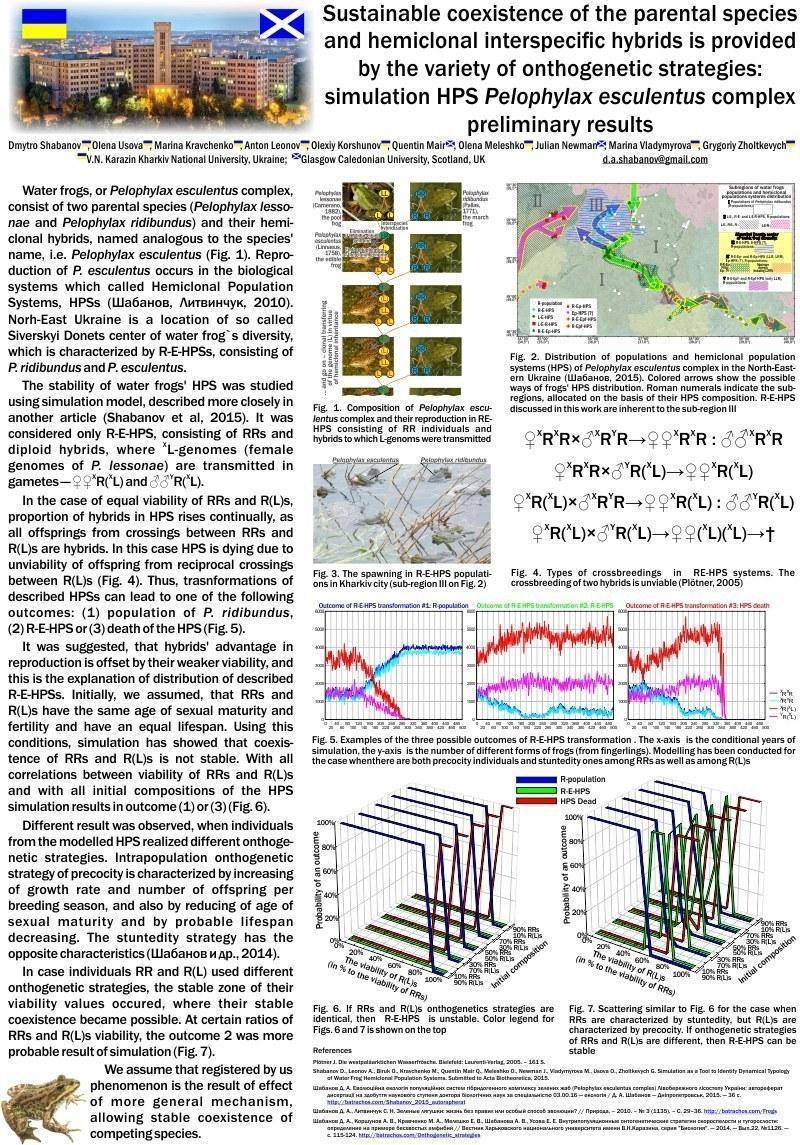 Mass polyploidy in P. esculentus was discovered in the middle part of Siverskyi Donets River basin in eastern Ukraine. This territory proved to be unique in terms of Pelophylax esculentus complex population systems variety, and was named Siverskyi Donets center of green frogs’ diversity. Population systems here consist of P. ridibundus and both diploid and triploid P. esculentus. The latter is interspecific hybrid, which reproduce hemiclonally by crossing with parental species (P. ridibundus or P. lessonae). Structure of the population systems is of great interest. The majority of water frogs’ population investigation deals with samples of mature animals, while subadults are less studied. We collected the random sample of 73 small water frogs from the Siverskyi Donets River floodplain in Kharkiv Oblast of Ukraine in September 2014. All frogs were measured, injected with colchicines and sacrificed after anesthesia.

We collected blood smears, intestine and testes for karyological analysis, and second toes for age determination.

Frogs ranged in length from 20.7 to 45.3 mm and aged 1 to 5 years. The sample included 34 females and 39 males. We defined 10 females as P. esculentus (5 diploids and 5 triploids) and 24 as P. ridibundus. There were 26 P. esculentus (20 diploids and 6 triploids) and 13 P. ridibundus among males. As expected, the erythrocytes of triploids were significantly larger than diploids’ ones. Although the boundary revealed was about 28 micron, we observed overlapping of diploid and triploid cells size. Therefore in such borderline cases true ploidy could be determined by karyological technique only. We found, that there is significant positive correlation between erythrocyte size and body length in both diploids and triploids. Spearman correlation coefficient reached 0.72 (p=0.013) in diploid hybrids and P. ridibundus, while in triploids this coefficient was 0.30 (p=0.018).

Average ratio between testes length and body length appeared to be larger in parental species than in both diploid and triploid hybrids.

Age was determined by skeletochronology technique. The majority of individuals were 2 (52%) and 3 years old (22%). We compared average body length of two- and three-years-old frogs and found that triploid hybrids tended to grow faster than diploids. Rare mature sperms were observed in testes of diploid P. esculentus that reached 4 and 5 years age. However, among triploids and P. ridibundus there were males aged only two years, which produced a few sperm. Further karyological analysis revealed that only about 6% of spermatocytes I in diploid P. esculentus testes had normal karyotype with 13 bivalents. The majority of the meiotic cells have diploid chromosome set that did not form normal bivalents (37%), while about 6% had doubled number of chromosome and the rest were aneuploid. In total, 169 meiotic plates were analysed. Triploid hybrid males had no normal spermatocytes I with 13 bivalents at all (53 plates analysed). About 11% of meiotic divisions included 39 (3n) chromosomes, which were composed in bivalents, multivalents and univalents. These cells probably resulted from normal 3n spermatogonia, which entered meiosis without elimination of one parental genome. P. ridibundus demonstrated more stable gametogenesis and had 54% of diploid spermatocytes with 13 bivalents (99 plates analysed). Among mitotic spermatogonial plates we counted 25% of normal diploid cells in P. ridibundus and 31% of such in diploid P. esculentus. This proportion was much lower in the triploids’ testes, reaching only 5%, while the number of 3n mitotic plates was higher (11%). In total, 126 mitotic plates were analyzed in P. ridibundus, 297 in diploid P. esculentus and 56 in triploid P. esculentus.

These results allow us to conclude that diploid and triploid P. esculentus have considerably disturbed cell division and, probably, constrained development of gonads. 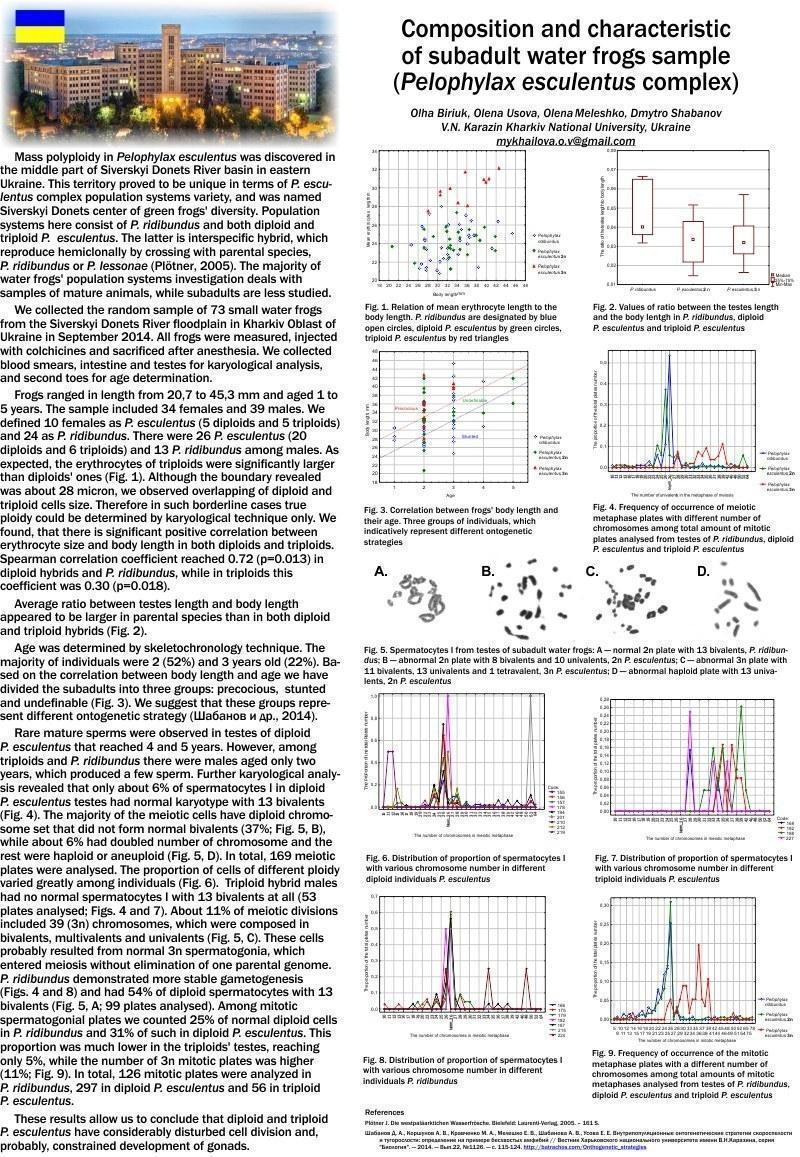